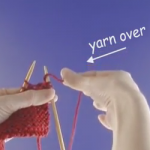 As soon as you learn to knit and really begin to master the basics, you begin to realize that unless you want to knit large rectangular objects for the rest of your life, you’re going to need to learn some new tricks! One such trick is increasing and decreasing stitches. This is a basic technique that will allow you to make custom shapes, clothes, and fancy designs.

How To Increase A Knit Stitch

To increase a stitch, you can simply “yarn over” or on a pattern, this would appear as: yo. A yarn over consists of wrapping the yarn around the needle you’re knitting onto. When you come back around to it in the next row, it will appear on your needle as another stitch waiting to be knitted.

To view a demonstration of an increase using a yarn over, click below:

Here is another example of a Yarn Over:

How To Decrease A Knit Stitch

There’s a number of ways that you can decrease stitches. I’ll show the two most common ones here.

First there’s the Knit Two Together method. This simply involves knitting two stitches together, as the name implies. In a pattern, it will appear as k2tog. It can be a little bulky though, if you’re using a chunkier yarn. If big yarn isn’t a problem though, it’s the most cut and dry way I know of to decrease stitches.

I always have used the Knit Two Together method until I learned a slightly more streamlined version. This is a left slanting decrease stitch called Slip Knit Pass and appears on patterns as: skp. To make a Slip Knit Pass, you’re going to slip a stitch onto your working needle without knitting it. Then knit the next stitch, and slide that onto your working needle. Now slip the slipped stitch over the knitted stitch. This reduces the two stitches down to one!

To view a demonstration of both decrease stitches, click on the video below!

The Pass Slipped Stitch Over, or psso, is another label for the Slip Knit Pass.

Here is an example of the psso in action:

Are you Left Handed, or do you know someone who is?
We have knitting tutorials just for Left Handed Knitters here!

How to Knit – Knitted Cast On

Knit away those annoying yarn tails by casting on without them! Can it be done? Yes it can! It’s called a knitted cast on and here’s how to do it. […]

How to Knit and Purl Left Handed Using the Continental Method

Ever tried working on a knitting pattern and not understood what it meant? Here’s a comprehensive list of knitting abbreviations and their definitions. […]