I learned to make these ornaments from my husband’s grandmother. They’re so simple to put together, and they’re one of those things that always makes me think of the winter holidays. They make great gifts, stocking stuffers, or are a nice touch when tied to a bigger package.

Update: I have made hundreds more of these ornaments since I originally posted this article. I’ll include photos at the bottom of this article for a inspiration!

Round Stands or styrofoam egg cartons: These are very useful for standing up your soldier as he dries. There are round wood stands that hold clothespins upright and are usually sold near the clothespins in a craft store. My problem with them is that if you bump the table you’re working on, they tend to fall over, but you can use those same stands to display the ornament if you don’t want to hang it up. Another option is to use a styrofoam egg carton with slits in the bottom. Make sure it’s styrofoam! I tried the paper cartons, and the fibers stuck to my paint job. If you can’t find styrofoam cartons, you can find gently used ones on Ebay.

Cut The Arms, Prep The Body

Cut the popsicle stick to about 1″ long. Divide it in half again lengthwise. Sand the wood on the arms and body if it’s a little jaggy. 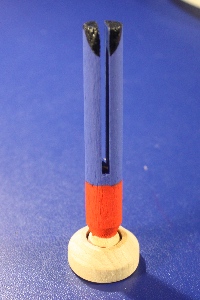 First, paint the legs. Using the blue paint, paint from just above the split in the clothespin down to the bottom, making sure to cover the very bottom and between the clothespin prongs. Next, paint the area above the blue to the “neck” in red. You might need to give everything a second coat of paint before proceeding further. 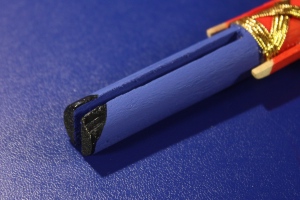 Now it’s time to paint the face! I tend to keep my faces very simple – you can do more if you feel so compelled. Otherwise, I simply put a smiley face with eyebrows on my soldiers. Two green or blue eyes, a red mouth, and eyebrows that match the hair. For the hair I pretty much use a Lego-style haircut on him. I give him long sideburns that define where the ears would be, and then trace around the ear area, filling in the back and top of the head. You don’t have to get too detailed on the top of the head though because the pom pom “hat” will be glued up there.

Glue The Parts Together

I’d like to take a moment to say why I think hot glue is not a good idea for this project. This is a Christmas ornament and will probably be packed away into hot attics and storage units during the rest of the year. We’ve used hot glue on projects like this before only to find the next winter season that the hot glue shifted and reset itself, often resulting in lost limbs and pieces! So I recommend a water based super glue for this project. It dries fairly quickly and holds the pieces together really well.

Before you glue the arms on, you need to glue the trim. Beginning on the side at the waist, apply a small dot of glue and the end of the 1/8″ gold braid. Loop it up and around the neck, and down to the opposite side at the waist. Cut the braid and glue that end down also. This will create a criss-cross on the front of the soldier. Next cut a piece for the belt, applying dots of glue along the waist, and securing the braid down.

Now apply a line of glue on each side where the arms will go. Be sure to cover the braid as well with glue; wherever the arm will be resting. These things pop off easily so it’s best to glue them down as securely, but neatly, as possible. Now glue the pom pom to the top of his head*. I’ve found with the pom poms I purchased, they aren’t entirely round but tend to have flat sides. I use those flat sides as the sides of the hat. It seems to give it a more vertical appearance, like European or marching band Shako caps. Now cut a short piece of the 3/8″ metallic trim, about 3/8″ wide. This will be the shoulder braid. Carefully glue it to each shoulder.

*Another option is to put a screw eye on the head before you put the pom pom on and then attach the pom pom. I put mine on at an angle so that it pokes out just behind the pom pom.

Here is an ornament I made with a clothespin that didn’t have a center cut for the legs and flat back Swarovski crystals. Though this clothespin was actually a “reject”, you can purchase similarly cut wooden pins like this. 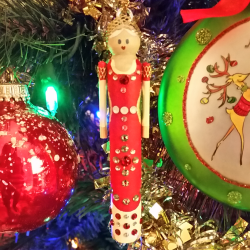 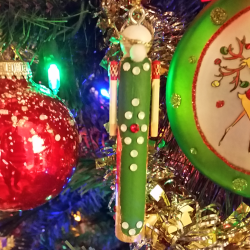 I used some wireform by Amaco, which I spray painted gold, for the crown and sleeve detail.

How to Make a Photo Refrigerator Magnet

Ever wanted to make those awesome glass magnets you see everywhere, but want them to have a personal touch? Well here’s our tutorial showing you just how to make them. […]

I used some items from the craft and dollar stores, plus things found at home, to create this Halloween wreath in less than an hour. Super simple! […]

This is a set of free downloadable Christmas stocking patterns for you to use. Enjoy! […]